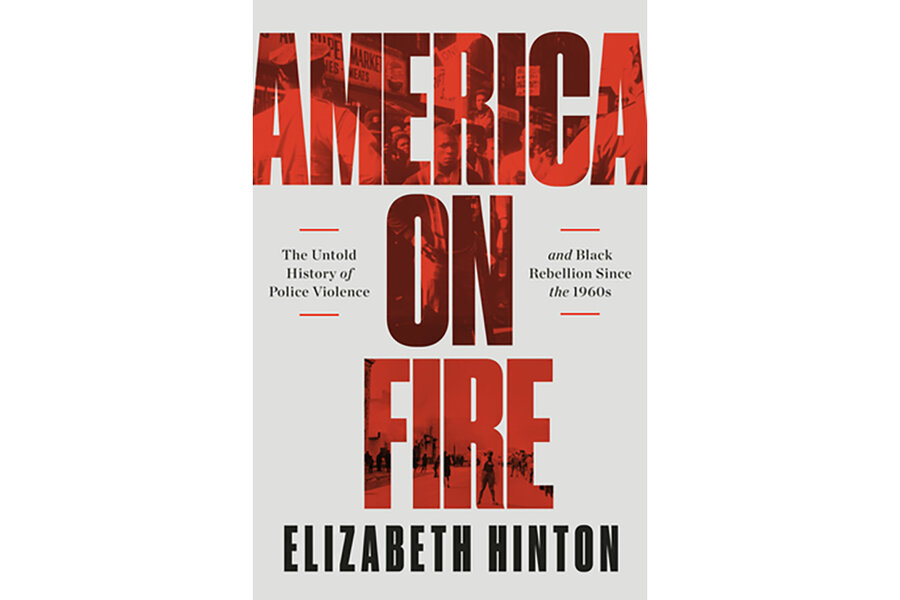 painful pattern repeats itself throughout America: A Black person is killed by police officers, protests ensue, and police are brought in to stifle the demonstrations. Most of the time, the protests against racial injustice are peaceful, but occasionally violence breaks out. Meanwhile, politicians do little to prevent the cycle from continuing.

The language surrounding that cycle is highly politicized. Elizabeth Hinton, a professor of history, African American studies, and law at Yale, drills down on the term “riot,” which she argues is a misnomer. In her book, “America on Fire: The Untold History of Police Violence and Black Rebellion Since the 1960s,” she suggests instead that violent protests are political acts best described as rebellions – “a sustained insurgency” against “an unjust and repressive society.”

This is a sequel of sorts to Hinton’s 2016 book, “From the War on Poverty to the War on Crime: The Making of Mass Incarceration in America.” There, Hinton showed how fears of violence prompted federal policymakers to build punitive, militarized urban police forces that filled prisons with Black inmates. In this equally impressive followup, Hinton chronicles how attempts to quell protests in American cities actually spawned more unrest.

Hinton begins the narrative in the late 1960s, a time when young Black Americans had grown frustrated with the failure of the civil rights movement to deliver on many of its promises. Disenchanted youths were confronted by police over minor infractions such as noisy parties or street football games, which officers let slide in white neighborhoods. Public housing projects and newly integrated public schools became particular flashpoints.

In the loop that followed, Black teens who were angry at being singled out often hurled rocks at officers. Police responded with riot gear, tear gas, and armored vehicles. At times, some Black protesters escalated further by throwing Molotov cocktails or shooting at officers from rooftops. (The prevalence of Black snipers was exaggerated, Hinton writes, a “bogeyman” that tapped into white fears of Black veterans trained to wage war in Vietnam and the specter of a nationwide Black conspiracy to kill police officers.)

Hinton doesn’t excuse such violence, but explains why it happens. “Black people might not believe it necessary to take the law into their own hands if the law worked for instead of against them,” she writes. Any form of self-defense by Black residents was deemed illegitimate, she explains, while violence perpetrated by white people was often overlooked.

The same pattern unfolded in big cities as well as smaller communities like York, Pennsylvania, and Cairo, Illinois, which are Hinton’s focus here.

In Cairo, the scene of a harrowing, years-long cycle of violence, white vigilantes donned white helmets and patrolled the streets with shotguns and dogs. Police gave bullets to white gangs, and at one point, Cairo’s mayor said, “If we have to kill them [Blacks] we’ll have to kill them.”

Riots have come to be seen as a fundamentally Black phenomenon. But Hinton points out that most instances of mass criminality were historically perpetrated by whites.

“White vigilante violence was a means to police the activities of Black people and to limit their access to jobs, leisure, the franchise, and to the political sphere,” Hinton writes. Only when white people “no longer appeared to be the driving force behind riots” were those riots labeled as “purely criminal, and completely senseless, acts.”

In the last 40 years, major rebellions have tended to break out only “after exceptional incidents of police brutality or miscarried justice,” Hinton writes.

She points to the occasional sign of hope. In Cincinnati, “vigorous” intervention by the U.S. Department of Justice helped overhaul the police department. Trust increased as the police use-of-force incidents fell by more than half, although these reforms brought only “limited change” for most Black people in the city, according to Hinton.

The author touches briefly on the new Black Lives Matter era of rebellion – fueled in part by ubiquitous videos of police brutality – and how it differs from earlier ones. She notes that much of the violence following George Floyd’s death in Minneapolis in 2020 was directed at monuments rather than police officers or businesses. Some police and public officials have begun to participate in nationwide demonstrations to express support, and they’ve worked to defuse tensions.

Get the Monitor Stories you care about delivered to your inbox.

At the height of the protests, Hinton notes that Sen. Tom Cotton, a Republican from Arkansas, wrote in The New York Times that the right way to “subdue” the “rioters” was with “an overwhelming show of force to disperse, detain, and ultimately deter lawbreakers.”

Hinton, who began work on this book long before the summer of 2020, serves up a timely repudiation of that approach. Lawmakers would surely benefit from reading what she’s produced.

版权声明：多维客是一个汇聚各方言论的平台，以实时上载用户内容的方式运作。本网并无义务事先对用户内容事先加以审查或筛选，对所有用户内容的真实性、完整性及立场等各方面，不负任何法律责任。本网的服务条款不允许用户未经授权上载涉及他人知识产权（包括版权和商标）的内容。如果您认为有人未经授权使用您的版权内容，请联络我们（copyright@dwnews.com）提出版权下架请求并提供相关背景资料。
Copyright Statement: Dwnews Blog is a platform that gathers the opinions of all parties and allows users to upload users’ content in real time. This website is not obliged to review or screen users’ content in advance, and assumes no legal responsibility for the authenticity, completeness and opinion of all users’ content. Our Terms of Service do not allow users to upload someone else's intellectual property material without authorisation, including copyright and trademark. If you believe someone is infringing your copyright, you can report it to us (copyright@dwnews.com) and submit a copyright removal request by providing the relevant background information.
美国