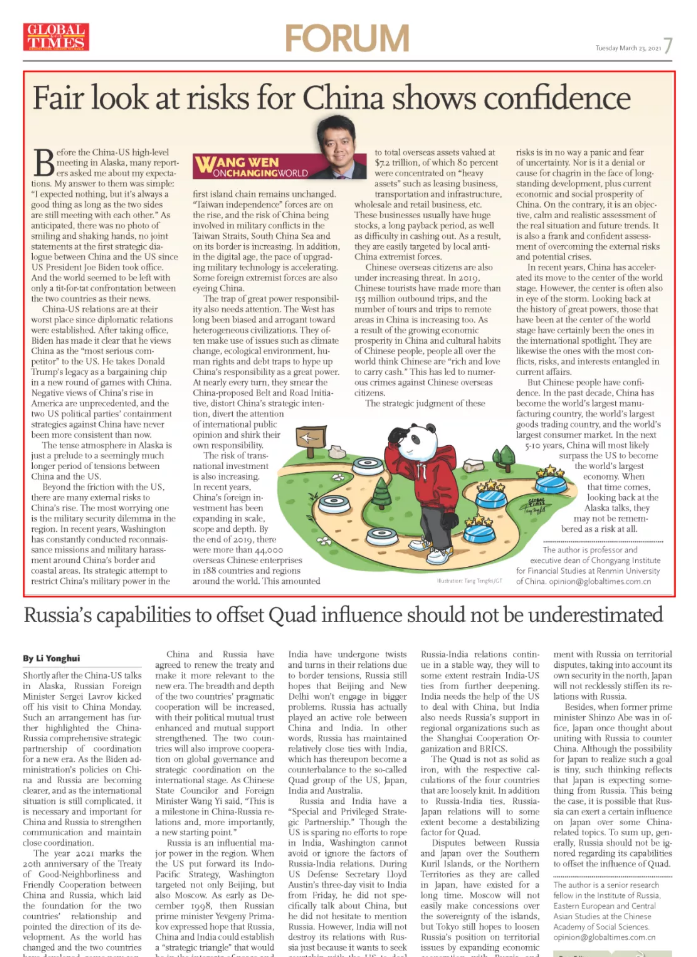 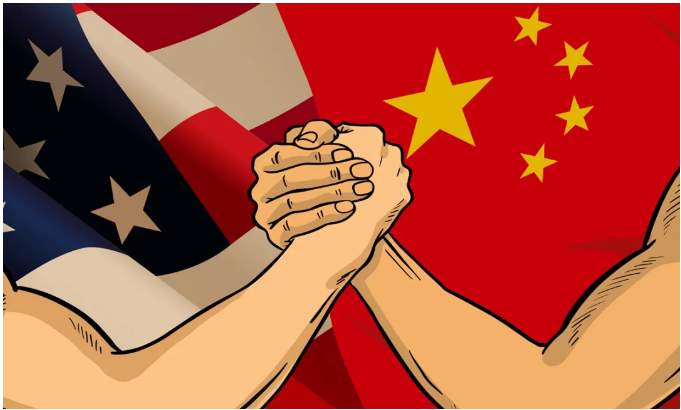 China-US relations Photo: GT
Before the China-US high-level meeting in Alaska, many reporters asked me about my expectations. My answer to them was simple: "I expected nothing, but it's always a good thing as long as the two sides are still meeting with each other." As anticipated, there was no photo of smiling and shaking hands, no joint statements at the first strategic dialogue between China and the US since US President Joe Biden took office. And the world seemed to be left with only a tit-for-tat confrontation between the two countries as their news.
China-US relations are at their worst place since diplomatic relations were established. After taking office, Biden has made it clear that he views China as the "most serious competitor" to the US. He takes Donald Trump's legacy as a bargaining chip in a new round of games with China. Negative views of China's rise in America are unprecedented, and the two US political parties' containment strategies against China have never been more consistent than now.
Young officials in the Biden administration are clearly hawkish toward China. Science and technology suppression, trade decoupling, human rights provocations, and sovereign intervention remain the conventional tools of the US to deal with China. The tense atmosphere in Alaska is just a prelude to a seemingly much longer period of tensions between China and the US.
Beyond the friction with the US, there are many external risks to China's rise. The most worrying one is the military security dilemma in the region. In recent years, Washington has constantly conducted reconnaissance missions and military harassment around China's border and coastal areas. Its strategic attempt to restrict China's military power in the first island chain remains unchanged. "Taiwan independence" forces are on the rise, and the risk of China being involved in military conflicts in the Taiwan Straits, South China Sea and on its border is increasing. In addition, in the digital age, the pace of upgrading military technology is accelerating. Some foreign extremist forces are also eyeing China.
The trap of great power responsibility also needs attention. The West has long been biased and arrogant toward heterogeneous civilizations. They often make use of issues such as climate change, ecological environment, human rights and debt traps to hype up China's responsibility as a great power. In particular, they take advantage of the negligence of some Chinese enterprises abroad. They also try to strengthen their discourse hegemony in the West with double standards. At nearly every turn, they smear the China-proposed Belt and Road Initiative, distort China's strategic intention, divert the attention of international public opinion and shirk their own responsibility.
The risk of transnational investment is also increasing. In recent years, China's foreign investment has been expanding in scale, scope and depth. By the end of 2019, there were more than 44,000 overseas Chinese enterprises in 188 countries and regions around the world. This amounted to total overseas assets valued at $7.2 trillion, of which 80 percent were concentrated on "heavy assets" such as leasing business, transportation and infrastructure, wholesale and retail business, etc. These businesses usually have huge stocks, a long payback period, as well as difficulty in cashing out. As a result, they are easily targeted by local anti-China extremist forces. The owners of these businesses may suffer heavy losses and even lose their lives if they are not careful.
Chinese overseas citizens are also under increasing threat. In 2019, Chinese tourists have made more than 155 million outbound trips, and the number of tours and trips to remote areas in China is increasing too. As a result of the growing economic prosperity in China and cultural habits of Chinese people, people all over the world think Chinese are "rich and love to carry cash." This has led to numerous crimes against Chinese overseas citizens, including thefts, robberies, kidnappings, and terrorist attacks. It is foreseeable that the protection of personal safety overseas will remain the top priority for China to defend its national interests.
At the same time, there are many external risks that may have an impact on the country. These include the COVID-19 pandemic, transnational crime, frequent fluctuations in capital markets, currency wars, anti-globalization waves, extremism, terrorism and separatism.
In China's thousands of years of history, the country has never been so widely intertwined with the world. The country has never had such a wide global influence, and there were never so many external factors involved in the process of the country's rise as there are today.
The strategic judgment of these risks is in no way a panic and fear of uncertainty. Nor is it a denial or cause for chagrin in the face of long-standing development, plus current economic and social prosperity of China. On the contrary, it is an objective, calm and realistic assessment of the real situation and future trends. It is also a frank and confident assessment of overcoming the external risks and potential crises.
In recent years, China has accelerated its move to the center of the world stage. However, the center is often also in eye of the storm. Looking back at the history of great powers, those that have been at the center of the world stage have certainly been the ones in the international spotlight. They are likewise the ones with the most conflicts, risks, and interests entangled in current affairs.
But Chinese people have confidence. In the past decade, China has become the world's largest manufacturing country, the world's largest goods trading country, and the world's largest consumer market. In the next 5-10 years, China will most likely surpass the US to become the world's largest economy. When that time comes, looking back at the Alaska talks, they may not be remembered as a risk at all.